Back to Main Page

There are only two types of letterhead authorized for use: standard (pre-printed stationary) and computer-generated.

MAJCOMs may elect to use generic two-line command letterhead for command-wide use. MAJCOMs may authorize letterhead below wing-level if the quantity needed justifies the printing cost or other circumstances warrant. Any unit without its own letterhead uses its parent unit’s letterhead stationery and identifies its organization and standard office symbol in the FROM caption.

Ink. Print the letterhead and seal using either blue or black ink.

Seal. The DoD seal is one inch in diameter. Align the seal 1/2-inch from the upper left and top edge of the paper. Do not use any other emblem, decorative device, or distinguishing insignia with or in place of the DoD seal.

Format. Center organization name and address on the letterhead using no more than four lines:

First Line. DEPARTMENT OF THE AIR FORCE. Center this line leaving 5/8-inch from the top of the sheet. Print it in 12 point uppercase using copperplate letters, heavy plate Gothic letters, or equivalent.

Second Line. Center the name of the organization as shown in the G-series special order that established it. If G-series orders do not exist, the MAJCOM Director of Communications decides the second line. Put HEADQUARTERS before the organization’s name only if it appears in the activation order. Print it in 10.5 point uppercase using copperplate letters, heavy plate Gothic letters, or equivalent. If the name is more than fifty characters, you may use an additional line.

Third Line. If used, center the location without the ZIP+4 code on this line. Print it in 10.5 point uppercase using copperplate letters, heavy plate Gothic letters, or equivalent. The bottom of the third line should be 1 1/16 inches from the top of the sheet. If your unit is overseas, do not show the Army and Air Force Post Office (APO) or Fleet Post Office (FPO) number and a geographical location together. You may use the two-letter state abbreviation or spell out the state name. Do not use punctuation in the last line of the address element.

DEPARTMENT OF THE AIR FORCE
AIR EDUCATION AND TRAINING COMMAND

Computer-generated letterhead allows for the use of plain white bond paper and high production rates. It also permits an organization to generate its own letterhead stationery. 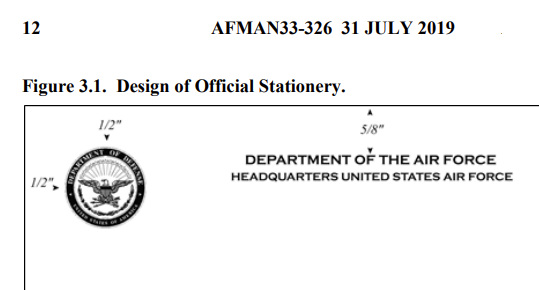 89th Airlift Wing Example of Letterhead
This MS Word document can be used to size the DOD Seal.