Back to Main Page

The trip report is the common name for the report submitted by Air Force members when they return from a TDY. The purpose of the trip report is to inform the supervisor or NCOIC on events encountered while TDY.

It should be noted that, being selected to go TDY to represent the workcenter or unit is an honor but with that trust comes responsibility. Every effort should be made to record all significant information disseminated. Your unit is depending on you to bring back accurate and complete information. Responsibilities may have been assigned to your unit but if you don't relay that information, no one will know and the mission will fail.

One of the keys to success when writing a trip report is preparation. When you're TDY, take notes while events are occurring especially at meetings. The more detailed the better. At meetings, get a copy of the sign-in sheet to use as a reference when listing attendees on the trip report. 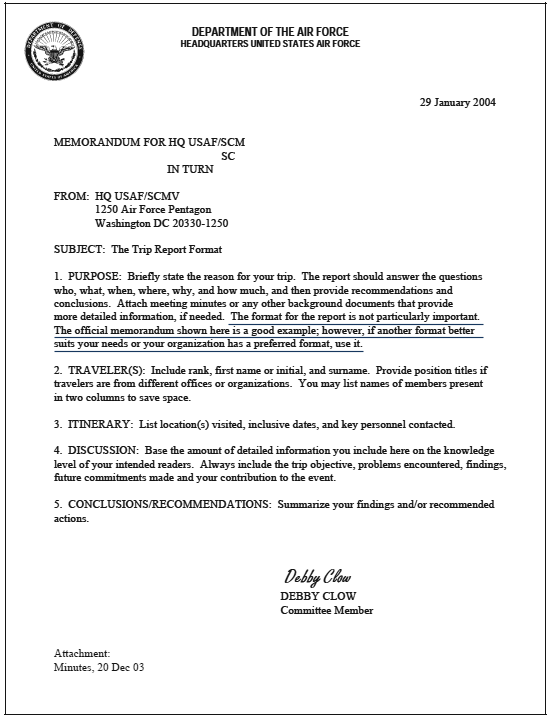 The above example was taken from AFH 33-337, The Tongue and Quill

The format for a trip report is the same as for other official Air Force written communications, the Official Memorandum. You may notice that in AFMAN 33-326, Preparing Official Communications, Chap 3, there are very detailed instructions on preparing an official memorandum. If you can follow them, good for you, but if not, the important thing to remember is that you should include the standard headings required on an official memorandum: MEMORANDUM FOR, FROM, and SUBJECT, paragraphs should be numbered, the report should be dated at the top right, and your signature block at the bottom right.

The format, while important, is not as important as the information contained in the trip report. If you don't have time or access to a word processor, your supervisor may accept a handwritten trip report. The overall goal is timely communication between the person who represented the workcenter or squadron during the TDY and his or her supervisor or NCOIC.

Note that the AFH 33-337, The Tongue and Quill, lists an example format for the Trip Report. This format may be used as a basic template. It's the same as the official memorandum with a few additions. Although the Tongue and Quill example shown above doesn't list it, if meetings are attended, the first paragraph should list all attendees and the organizations they represent. If any of the sections in the example shown above aren't appropriate, don't include them. This example is intended to be a basic template and variations are OK.

1. I left Charleston by air and arrived at Pope AFB on the afternoon of 11 Oct 14. The next morning I attended the ABC planning meeting held at the office of Northrop Grumman on South Bend Road, Fayetteville. The following people were in attendance:

2. After brief introductions, the meeting was conducted by the government representative, Mrs Sterling, and discussion focused on two main topics. First, the introduction and use of the new equipment during the planned exercises, and second, the scheduling and logistics necessary for succesful operations.

3. After addressing our general concerns, we broke into two groups with Northrop Grumman and Mrs Sterling focusing on the parameters under which the new equipment could be used and the responsibility for maintenance and operation. The rest of us hammered out the details necessary for refueling scheduling, maintenance, and operations during the three phases of Exercise Anvil Tree.

4. The end result of the Northrop Grumman/Government discussion was that the new equipment would not be introduced until phase III of the exercise and at that time, the Air Force would assume responsibility for storing and maintaining it. They were not specific as to which unit would be responsible. Northrop Grumman will provide on-site training during phase III and when needed after acceptance.

5. The operations planning was completed, with all assigned units providing the equipment and personnel as usual. We are supposed to provide 6 chalks and FLIR capability. The Rangers want access to UHF on all chalks. Capt Maryland is the POC for the planning and schedule for our people.

6. The meeting was concluded Monday afternoon and we broke up and returned home.