Back to Air Force Decorations

The Air Force Commendation Medal (AFCM) may be awarded to any member of the United States Air Force, on active duty or inactive reserve, who distinguishes himself or herself by heroism, meritorious achievement or meritorious service. This medal is typically awarded to junior NCOs that meet the criteria for this medal.

The Air Force Commendation Medal is awarded for outstanding achievement (generally an action or accomplishment) or meritorious service (generally a period of exemplary service) or acts of courage which don't meet the requirements for the award of the Airmans Medal or Bronze Star Medal and sustained meritorious performance by crew members. 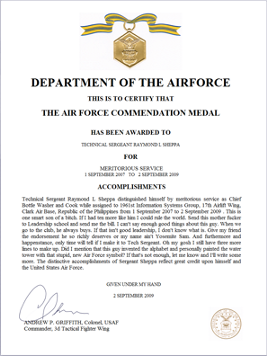